Before I began rabbinical school in Jerusalem this summer, I did something my tradition generally frowns on — I read the Pentateuch (the Five Books of Moses or the Torah) from cover to cover, without commentary.

At the time, Attorney General Jeff Sessions was quoting scripture to justify separating families at the Southern border. This served as a grotesque reminder of why the Jewish tradition generally frowns on reading the Torah alone and without context. There is so much one misses reading the Bible this way — on a what Jews would call the pshat or surface level, in terms of the richness of the text and also in terms of morality.

Still, I had never read the Pentateuch straight through, and I wanted to familiarize myself with the parts of it I knew less about and to get a sense of its sweep. So I dove into my project, unsure of where it would take me.

As I began reading, I stumbled on a tweet that changed the way I thought about the Pentateuch: 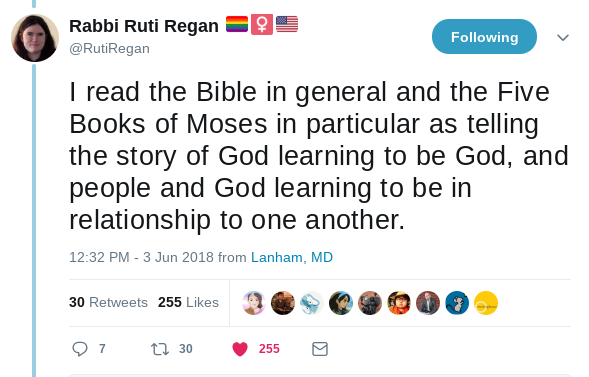 While I don’t want to say the Pentateuch is one thing, the perspective offered by Rabbi Regan provides a unified way of understanding the complicated and sometimes confusing narrative from Genesis to Deuteronomy. God and the people Israel are bound up in a changing, fragile and impassioned relationship.

I found it wondrous to read the Bible this way: by reading the Pentateuch, one encounters the changing way people long ago conceived of God. Of course the writers of the Pentateuch thousands of years ago lived in a patriarchal and slave-owning society that was flawed in a myriad of ways — and that is reflected in how these people saw God. But above all else, as the tweet suggests, the Pentateuch tells the story of an ancient step in an ongoing struggle to understand and to be in relationship with God.

The Pentateuch contains many surface-level examples of this struggle between various characters and God: there’s Abraham trying to convince God not to destroy Sodom and Gomorrah, Sarah laughing at God, Jacob wrestling with the angel, and Moses pleading with God on behalf of the people Israel. Although the conception of God seems to change within the Pentateuch, God is consistently an entity with whom the characters of the Bible can struggle and grow.

But more importantly, the broad sweep of the Pentateuch tells the story of a relationship between God and the people Israel in which the two parties yearn for a stable and productive relationship, but struggle and have trouble relating to one another.

Heschel makes it clear in his writing that he believes God needs humanity (or “man” in his language) just as much as humanity needs God. “This is the mysterious paradox of Biblical faith: God is pursuing man,” he writes in God In Search of Man. “It is as if God were unwilling to be alone, and he had chosen man to serve Him.” In The Prophets Heschel adds to this the idea that God is deeply implicated in humanity’s welfare — Heschel uses the word “pathos” to describe how God cares deeply for humanity.

Heschel’s description of a God who is deeply implicated in human morality and well-being resonates with me deeply. But regardless of whether it describes most contemporary people’s relationship with God, it seems that people in the twenty-first century can connect to this biblical theme of wrestling with God. Many people today experience some kind of spirituality, but aren’t sure how it connects to organized religion or theological belief — and people’s connection to the divine often changes over the course of their lives.

After reading the Pentateuch cover to cover, it seems that for a very long time humans have felt the presence of something bigger than them, something like God, and they’ve struggled to make sense of what exactly that thing is, and what it means for them to be in relationship with it.

Within this context, it seems there is a lot we can learn from the people who wrote the Bible. Perhaps it is helpful to to think of them as people who were fundamentally similar to us, but who lived in radically different circumstances. These were people who were greatly inspired, who drew on the wisdom of their civilizations and of even more ancient traditions, and who had a more immediate connection to the precariousness of life than most modern people. From them we can learn about the smallness of our place on earth, the tempestuous nature of life and history, and more than anything, we can learn from them to be in dialogue with God.

These were people whose collective insight surpasses the mundane nature of writing today, for whom words were valuable — memorized and etched onto animal skin. Their lives were difficult and short and they were intimately familiar with the night sky. It seems they can teach us a great deal about what it means to be in relationship with God.