Another day, another museum. After my experience yesterday in the National Gallery, I had quite a different experience today on the Mall. I went to the National Museum of the American Indian.

I came to the museum skeptical. I took a class this summer on Native Americans that made me really disillusioned with the way Native Americans are depicted in mainstream culture. It seems that Native Americans are very often objectified, whether as a source of national guilt, as gaming profiteers, or as sources of spiritual mysticism. I’m also weary of museums that hope to serve a didactic role in consciousness raising. To make matters worse, someone had mentioned to me that the museum focused on Native culture instead of genocide.

But the museum blew me away. First, the museum did an excellent job of addressing the meta-question of what the museum was intended to do. There was a video that discussed how history is a construct and that Native American voices have often been left out of mainstream American history. It went on to acknowledge that the museum has a specific agenda–to argue that the story of Native American survival is one of the greatest stories in human history–and concluded that one should be skeptical of all history, including this museum’s. The disclaimer video might have been a little overly dramatic, but it served its purpose.

As I walked through the museum, I was struck by the extent to which the exhibits were nuanced. One example that made a particular impression on me was the discussion of Native American Christianity. The exhibit displayed around 100 Bibles in different indigenous languages. There were brief quotes about the history of Native Christianity on the glass that covered the Bibles. One quote mentioned the Christian boarding schools of the 19th and early-20th centuries, which played a huge role in destroying traditional indigenous cultures. Another quote explained how a 17th century missionary spent 15 years learning an indigenous language in order to translate the Bible. Yet another discussed how a mid-20th century Papal decree liberalizing Church practices worked with other factors to spark Indigenous Rights movements. Finally, a quote explained how the majority of contemporary Native Americans are Christians.

I was amazed by the extent to which the museum was telling the story of genuine subjects. There is the missionary who spent years working to translate the Bible. There were no easy answers to the question of Christianity in Native Culture.

I could give other examples of how the museum told the stories of active people and avoided essentializing. There was a nuanced discussion of gaming, an exhibit about a contemporary Inuit elder, and a general effort to emphasize how much diversity there is in indigenous cultures.

Personally, going to this museum was an important experience. I often get dismayed with how the efforts of cultural progressives and academics in cultural studies can be ineffective at promoting cultural understanding. Very often, I feel that teaching cultural understanding can end up being pedantic and can even lead to the objectification of other cultures. Seeing this sophisticated discussion of such a challenging issue (on the National Mall, no less) was really encouraging.

To round out my experience, there was also a fabulous temporary exhibit on display by the contemporary artist, Brian Jungen. He reworks common objects found in pop-culture to form sculptures in keeping with indigenous traditions. It’s conceptually provocative and visually appealing. Here’s an example: 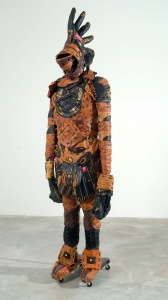 2 thoughts on “The National Museum of the American Indian”