I knew yesterday was going to be an interesting day. Public transportation was largely going to be shut down, and massive protests were scheduled: France was doing la grève.

The eight largest union conglomerates had come together to organize a national strike in response to Sarkozy’s response to the financial crisis. For background, check out the New York Times writeup. The strikes were largely unsuccessful at shutting down Paris, but hundreds of thousands of people took to the streets. 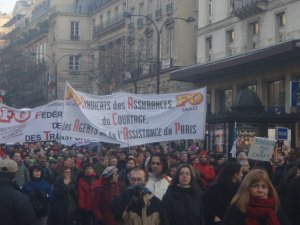 People were protesting a couple blocks from my foyer so I decided to go investigate. I asked a few young people why they were protesting, and guy who was around my age explained that he was protesting everything. Sarkozy’s response to the crisis, French social structure generally, the educational reforms that are in progress, and a lack of care for the environment. He was really earnest, and I asked him about whether he thought these protests would turn into concrete policy changes. He said that was a big concern. He then went on to talk about how much he loved Obama, and went back to his Heineken. I wished him a bonne journée and continued on my way.

I walked all the way from my foyer to the Opéra. 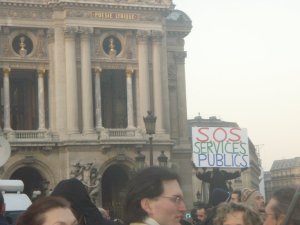 Then I took the métro, which had limited to service, to the Bastille and met up with some friends. The protest continued into the night, and we found what was called a grave (read g-rave). A group of people, many of whom seemed to be on drugs, danced behind a truck that was blaring techno music. My friends and I followed the music at least three miles back to my foyer. 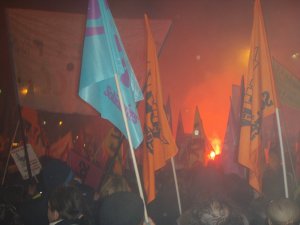 As always, leftists know how to have fun. What really struck with me, though, were the implications of the protest. A myriad of different constituencies were rallied around saying no to Sarkozy’s policies. I saw anti-Israel signs, pro-social security signs, anti-educational reform protesters, lots of different unions and obviously anarchists and communists.

American progressives talk a lot about unifying different causes and interests groups, and in many ways, these protests showed how this can come up short. People were clearly protesting against something, but what were they protesting for? (For background, France’s socialist party is in en crise).

So I am left with mixed feelings. There is something I really like about a country in which people are willing to mobolize on this level. And yet, I’m not sure where all this leads. To take a step back, France is definitely doing some things right, with (some of) its social safety net, (partly) good education system and sense of accountability for the Government. Meanwhile, there are big problems with unemployment, partly because of overly leftist employment policies, and other problems I don’t want to get into now. 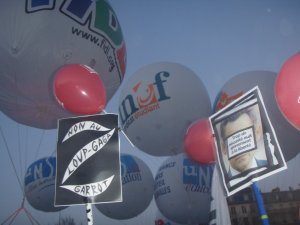